This is the second of a two-part series discussing differential item functioning. Part I provided an overview of DIF as a concept, and a background for discussing some of the methods used to examine DIF. Part II will provide an illustrative example of DIF analysis as it is conducted at Paragon Testing as a part of our ongoing commitment to quality and equitability in testing. The analysis in question was part of an exploratory pilot analysis intended to determine the best methods for detecting DIF in Paragon’s tests.

This analysis used logistic regression (LogR) to assess DIF on the Listening and Reading components of the CELPIP tests. The groups being compared were males and females, as reported by test-takers when they register to take a CELPIP test. Test takers who did not provide gender information were excluded from analysis. The scope of the analysis was all of the items in use during 2017, which includes both items introduced via field testing and items used as anchors in performing IRT equating for the Listening and Reading components. Items which had below 200 responses from either group during 2017 were excluded from analysis, as too few responses from either group decreases the accuracy and interpretability of LogR results. Finally, test takers from the two groups were matched on their IRT ability parameter (θ), rather than total test scores. This was done because it allows for comparisons between test takers who received the same items, but not the same test form, as is often the case.

In other words, for each item which received greater than 200 responses by both males and females in 2017, the LogR technique creates a probability model wherein the probability of correct response to an item is the dependent variable, gender differences (coded 0, 1) and θ are independent variables used to detect the main effect of group differences (uniform DIF), and the interaction between gender and theta is used to detect non-uniform DIF. The main effect of gender is uniform DIF, and the interaction effect of gender is non-uniform DIF.

Finally, the difference in the -2 log likelihoods of the models is compared to a chi-squared distribution with two degrees of freedom. If the difference is statistically significant at α = 0.05, the item is flagged as exhibiting DIF and the effect size is examined to determine the degree of DIF (See Shimizu & Zumbo, 2005 for further explication of the LogR technique for detecting DIF in language assessment).

The following plot shows the item characteristic curve of the item which exhibited B-level DIF. An investigation into this item shows some indication of why it may be exhibiting gender DIF. Firstly, there is a much wider standard error (represented by the faded grey bands) at the low end of theta distributions than the high end. This is because there are relatively fewer responses in the low-theta range than for both males and females. In addition, the sharp drop in expected probability of answering the item correctly at approximately θ = -1 indicates that this item was almost never answered incorrectly, except by test takers at the lowest theta-levels. This sharp difference in proportions of responses is a potential source of estimation bias in logistic regression parameters (King & Zeng, 2001). 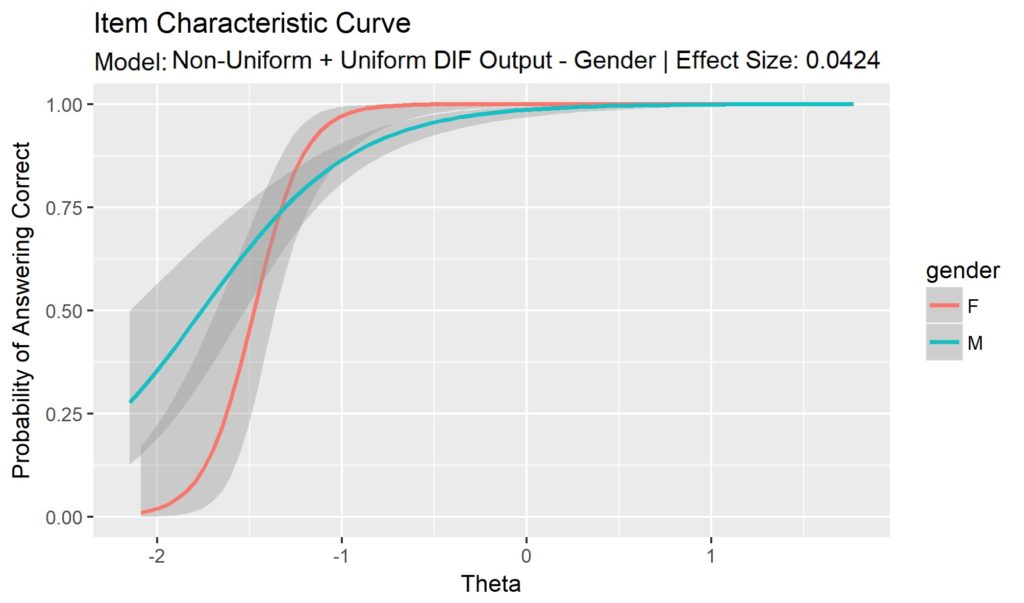 Given the high-stakes usage of the CELPIP-G and CELPIP-G LS in Canadian citizenship and immigration decisions, it is important to confirm that there is no advantage or disadvantage to belonging to a certain social group, especially one which is protected from discrimination by Canadian law, as is the case with gender. Thus, the purpose of this study was to assess DIF on the CELPIP Listening and Reading components between male and female test takers. The analysis presented above assessed Listening and Reading items on the CELPIP tests for DIF between males and females using binary logistic regression. The results showed that there is no indication of beyond-negligible DIF on any items assessed using either the Zumbo-Thomas scale, while one item did exhibit B-level DIF on the Jodoin and Gierl scale. However, closer inspection of the item revealed that that gender DIF is likely an artifact of a skewed population of responses for this item. Because it has so few incorrect responses, a small variation in the number of incorrect responses between males and females is magnified and reflected as DIF. In order to combat this effect, future studies will be run with restrictions on the minimum number of correct and incorrect responses from both groups (Male/Female), in addition to the minimum population sizes for both groups on each item.

Overall, this analysis has indicated that the item development processes and procedures currently in place for quality control in Listening and Reading item development are performing well with respect to DIF between males and females. This means that scores on the Listening and Reading components of the CELPIP tests may be understood as estimates of English language proficiency which are unbiased with respect to gender. While further research is necessary to assess DIF on the Reading and Listening components of the CELPIP tests, the results of the present study are seen as being a positive indicator that the CELPIP-G and CELPIP-G LS tests are performing as intended, and not (dis)favouring test takers on the basis of gender.

References (Combined between Parts I and II)